In a previous post I spoke about Tsunderes and my love/hate relationship with them, while some of those men can take the cake with irritating me to no end. There is one particular type of character(s) I don’t care to touch as often as they are very virile and dominant in their nature. As we go deeper into the Visual Novel Helldom, we start to take a look at the different types of people you’ll meet in the games, and one of the most popular character types is…

The Dom aka Alpha ‘Daddy’

*Snort* Okay, I know I did the ‘daddy’ thing because I have a very delicate relationship with this type of character even in romance novels, and for good reasons. This type of character is very easily able to be written as an abusive Motherfucker, or a proper dominant alpha with a possessiveness that can treat his lover PROPERLY.

One GOOD example of a BAD dominant male is:

A good example of an AWESOME dominant male:

Gideon Cross is the best example of what a good dominant male is like, he gives up control to his lover and changes into a better person for her. However, he isn’t someone who will allow his morals or characteristics to be changed by force, that’s where things get very fierce. This is normal, you shouldn’t be trying to change anyone into anything, they should change naturally because they want to change not because someone is pointing the gun at their head to do so.

I’m a book reader, so be bound to see book references in here besides VNs *cheers*

What exactly is a Dom type and what are their characteristics… Oh I can give you a big list but let’s keep it simple… or try to.

In most Otome games, the Dom is a person driven for success, usually, they are already a successful person in a game and or they’ve created an empire for themselves and rule over it like a king (cough, Eisuke). Their focus tends to be on obtaining a certain goal, whether it’s fame, success, or world peace, these guys learn certain tactics and maneuvers to forge their own paths. Creating several pathways for success, once they get what they want, they’ll move onto the next goal on their itinerary unless something changes their ideals.

These guys are never someone to sit in the backseat or the passenger side, they don’t like mixed messages and cannot stand when you’re wasting their time. A lot of times in harems, or thriller type games with a romantic element in there, the dom type is the leader of the group. It’s actually easy to spot them in most cases in a game since they will most likely be either in the center of the game cover or they have a close upon them.

I digress, when the dom is portrayed as the leader of the group you better get ready to fight the man because you best believe your opinions will be ignored at the beginning which will definitely make you scream (or want to slap the absolute fuck outta them). To absolutely honest, because my astrological chart that allows my expression of speech is in Aries; which tends to be the typical sign of these doms besides Leo. You best believe when I see comments like this from a dom:

Entitled to the World

We can’t have a dom without a sense of entitlement, whether they created their kingdom from the ground up or were served it on a silver platter these guys don’t take too kindly when you rain on their parade. Most of the time, if a Dom is done correctly, their actions to rule the world and be entitled to everything stems from a sense of a loss. However, they don’t personally make it a habit to degrade or humiliate someone unless you challenged them in their territory. 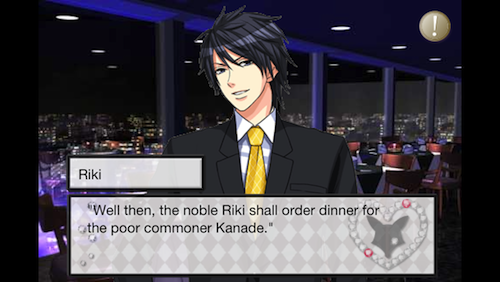 When you do meet a very preferably dom type, his nature of being entitled to everything and be fierce can kinda come off cute because they can’t express that they’re either jealous and whatnot properly.

Ah, the epitome of what draws a lot of fans to these types of men, the aggressive nature that they project, and the fact that they always happened to be hot as hell. Doms are fairly expressive when they are attracted to their love interest, a lot of it being sexually suggestive and doing things that are of ‘forced’ seduction. Somewhat similar to an S-Do type, the dom tempts the MC to do things that would push them out of their comfort zone.

I believe that this is the biggest reason why there’s a big attraction to these type of men in games, I feel the danger and also the bedroom bully ordeal entices audiences into choosing this kind of romance. I will agree, there are very few Dom types that are done well, and make you shiver from excitement at exactly what is about to unravel between you two. However, the biggest downfall for these characters at times happens to be when the MC cannot stand their own ground against them.

While the idea of being a submissive character in a romantic aspect is cool in the bedroom, it’s not really a warming comfort characteristic to have when you go toe to toe with an alpha. There are a few stories that I can deal with the alpha being the way he is and the MC being docile, but half the time it’s a no from me.

However, let’s get a good example of some seriously sexy dom types:

Riki Yanase from Love Letter from Thief X is a good example as while he is one of my favorite versions of a dom, he likes to be sexually explicit with his way of talking and teasing the MC. Usually drawing her to a false sense of security is when he takes that moment to ‘attack’ and place a situation between them that definitely gets your cheeks red.

Other times, he doesn’t need to place the MC in those situations as they are already in an area where he can do as he pleases and say exactly what he wants.

Gray’s Emotions at the Current Moment:

The truth is still the fact I have a love/hate relationship with this character a little more than a Tsun-Tsun type. Tsun’s are fairly easier to manage with their hot and cold emotions, those guys are easier to tease and get the truth out of in a game. However, don’t expect that from a don type, they are extremely prideful but they will apologize when they know they were truly in the wrong.

But, the best explanation that my friends and I say about this type of character is:

This is my own way of expressing what I think about them, I don’t agree with how they talk but you can’t help but want to challenge these alpha pricks at their own game. So when there is ever a choice to say something snarky, aggressive, and sarcastic–Oh you best believe that’s the first option I click on first, regardless of if it is the answer that gives me good or negative points.

It also may be a good case in point to bring up a famous dom in the Otome field, Eisuke Ichinomiya, I have an extreme love and hate relationship with this alpha Capricorn. His paid version irked me and made me dislike his intentions, it was a stark difference to his Party version which was a way more likable persona. So in honesty, I love his party version, hate his paid version.

FYI: Back in my days on tumblr, I had to RP as Eisuke for two days as part of a punishment game. Hooooooo boy……….. I am gonna say I’ve never had an inbox explode until those two days; anyone who RPs as Eisuke I salute the hell outta you because he’s a very high in demand dude. *Hat’s off to you*

Regardless, these are just my own opinions and everyone has different tastes; we can safely agree to either disagree or enjoy that we all have a love/hate relationship with certain types of characters. In conclusion, I feel this type of character is also a necessary component in any game, they do help spice up the storylines and romance but they can also pull an alluring intensity into the gameplay that you can help but consider… if you want to be dominated.

Gray’s Truthful reaction to doms in a game: