We all have games that we just didn’t jive with no matter what we tried to do, maybe a friend recommended it and it turned out to just not be your cup of tea. Another option is that the game looked good, the premise sounded amazing, but as soon as you hopped on that bandwagon it collided into a telephone pole and burst into flames in the first half the trip. Then there’s the last scenario )that always happens to me) where you had high hopes for the game, there was an amazing team of people who worked on the project, everything looked amazing, the beginning of the game is greatly executed, and then as soon you get closer to the climax–everything goes to shit…

Yep… I’m the type that has had all these happen to me, but the more often one associated with me is the last scene where the storyline falls short of the drama and issues it created in the beginning. It sucks, but it happens and we go on to live another day to find another game to erase the terrible experience. However, sometimes you can’t forget these games because they’re either sitting in your shelf or on your steam account begging you to replay them (even though you feel that slithering emotion to scream at your computer screen at seeing the title).

It’s rare for me to say what my least favorite games are, as I rarely have a game that falls flat for me (cough, Final Fantasy XIII-2).

While I’m going to list only a few of my least favorite games here, please be advised, I’m not here to fight anyone. These are my own personal opinions and to each their own, as I may like games that others didn’t like and vice versa. We all are gamers here with diverse opinions and desires, so take what I say with either a grain of salt or laughter.

This is a BL visual novel that I picked up because there was plenty of game reviews about how this game was well done, and the art is beautifully tasteful. I won’t disagree with those statements, what drew me to this visual novel was that the premise spoke about a young man who works in a bookstore but he is also a writer. The other thing that I’ve read, but I could be wrong, was that there was only one artist who worked on this game and created the most amazing CGs in this game.

As you can see above, the artist completely captured an elegantly put way of how writers/novelists/readers see books or how they write stories. We get enveloped in the words and devour the text like candy, completely submerging ourselves in a world that is truly captivating and engaging. I swear the artwork is so unbelievably magical, I was amazed by how gorgeous it came out and it was truly magnificent. 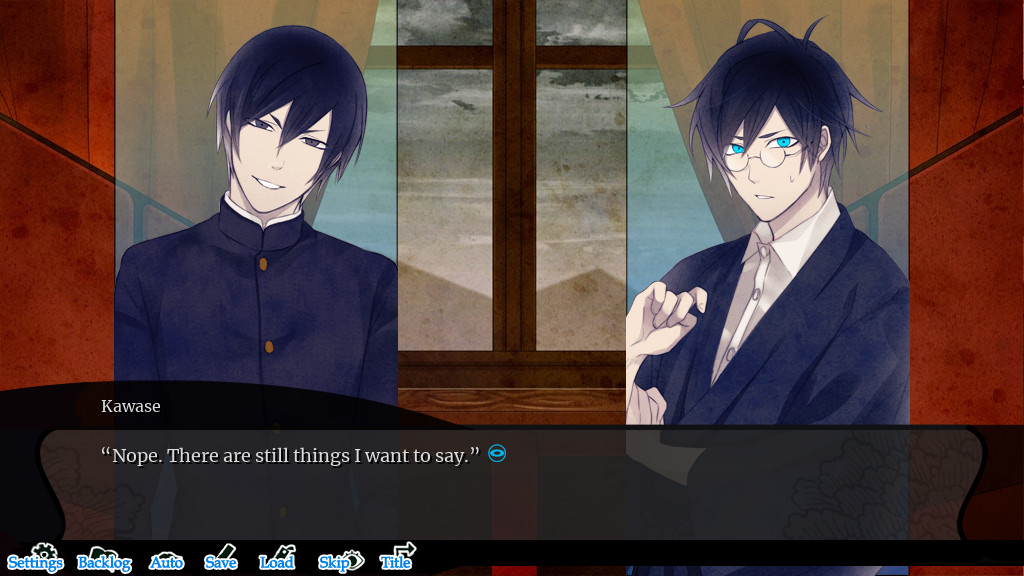 I’m also a historical setting game lover/nerd, so knowing that this game takes place in the Taisho era, I was quick to purchase it and was aesthetically pleased with the entire game’s plot setting. While we only have a few routes to undertake to get everyone’s routes unlocked, here is where my problem began…

The first route literally blew my mind, as in, I went brain dead with the redundancy of the chapters. I understand the premise of the game is time travel, and the first route you play is static, but I found myself gritting my teeth with the habits and thoughts of the main character. A lot of his ideas and solutions were agonizingly terrible and it made me want to punch the computer to see if my fist could slam into his cheek.

You see, the story was engaging in the first few chapters but after chapter 6-250,000 or repeats you go through, I was exhausted as hell. I couldn’t keep up with the story anymore and I lost complete interest; I will state I finished the true route which is the static story I’m talking about with his best friend that you’re trying to save. While the ending was emotionally satisfying without any tragedy (thank the gods for that otherwise I would of burned this game and possibly rage destroyed my computer…), the other routes are still waiting in the wind to be played.

And to be very honest with everyone, I will most likely challenge playing this game all the way from the beginning again to see if my view has changed. I usually try and give a game a second chance even if the initial game play was terrible, because I could of been moody or not patient enough to dissect the story like I normally do.

At this moment the game is sitting on my ‘TBP” list, as it was a nifty penny to purchase and I know I’ve gotta suck it up and go for it.

Okay, guys, I played this game back in the day and while the guys are hot looking of the routes fall short on what I felt was lack of enthusiasm for writing skills. The story is about an office romance, and I’m down for those kinds of tropes any day, however, it needs to be written well. Sadly, this game fell short of that, a lot of the routes feel incomplete and lack a certain amount of depth for us to really care about the characters and the MC.

How does it fall short? The stories focus more on the aspect of the heroine being either harrassed or bullied in some way or another to get her to be a better associate. I wasn’t keen with how everyone’s version of teasing was either inappropriate or borderline harassment and that’s an absolute ‘no no’ in my book. The game itself has stunning visuals and well drawn characters, it was saddening that they didn’t take the pleasure in developing a solid conflict, romance, and emotionally satisfying end for the routes.

Also, there were some instances that I felt I wanted to have the option to bitch slap a character to the next century for their comments.

This game had so much potential and it fell short on creating characters that we could fall for, the MC was at best, passive-aggressive and I can’t let that trait fly. It only works if the heroine slowly develops out of that trait and grows into someone who doesn’t talk that way every time. I digress, there were a few routes that were gems in the story, one of them being Koji Nagumo, he’s a sweet heart but I will point out he is ‘vanilla’ so don’t get your hopes up for sexy scenes.

There was also Shota the loveable little ‘shota’ type, while he was cute and fairly adorable in his route. I felt the writers didn’t do the story justice as the stories written with younger males tend to have the heroine looking at these characters as a younger brother. The MC kept mentioning it consistently that Shota was the same age as her brother and what not, and she doted on him like one.

I understand to a certain extent but the incident that caused some type of conflict to ‘help’ transition their relationship from brother/sister type vibe to relationship vibe was deflating… It could have been written better. Thus my sadness about how this game could of been so much more…

The only spice that probably would show up here and there was when you take on Tora’s route, but that’ll be a review in and of itself…

However, I do think that after the fallout of this game occurred, Voltage took in the feedback fans had about the problems this game had. As the next game that came out with a similar type of work background turned out to be a very well done game with more satisfying developments and emotional connections to the characters and the heroine.

(Available on Switch and Mobile) 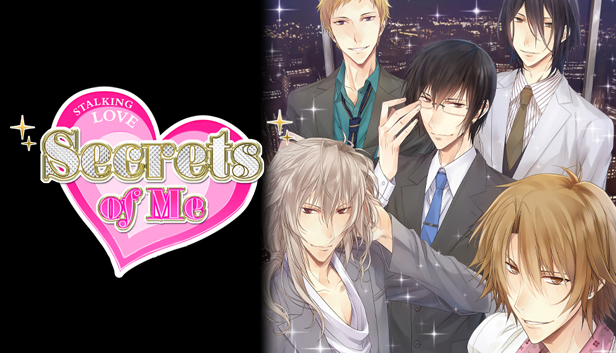 Guys, I love the horror genre and Yandere’s are a type of character I like, so when I first saw this game I thought it had that same element. Unfortunately, I was very wrong, and there were a lot of moments in this game that were more questionable than likable for a gamer. You’re basically getting revenge on the suitors you see above because they’ve made fun of you for how ugly you were and all the cringe-worthy bullshit of bullying that I DO NOT CONDONE.

It wasn’t even creepy or scary, it was just plain odd and didn’t give the feeling as if you were in a cat and mouse chase, it was more … How to explain. That you weren’t really doing any stalking, you were more obsessed to get the guy’s attention, then low and behold you fall in love with him even though it’s suppose to be the other way around. Rather than obsessed to be love, it was more obsessed for attention; starving for this one person to notice you…

No real feelings of vengeance… I did not get my ‘lady revenge’ kicks out of this one and neither was I impressed by the cast of men, I couldn’t fall in love with anyone or even like them.

You get plastic surgery to enhance your beauty and then go on a completely strange stalking spree of sorts to try and get this twisted version of revenge on the guy you choose… Normally, weird games I tend to take a dive into because I’m a believer that every otome game deserves some love and affection. 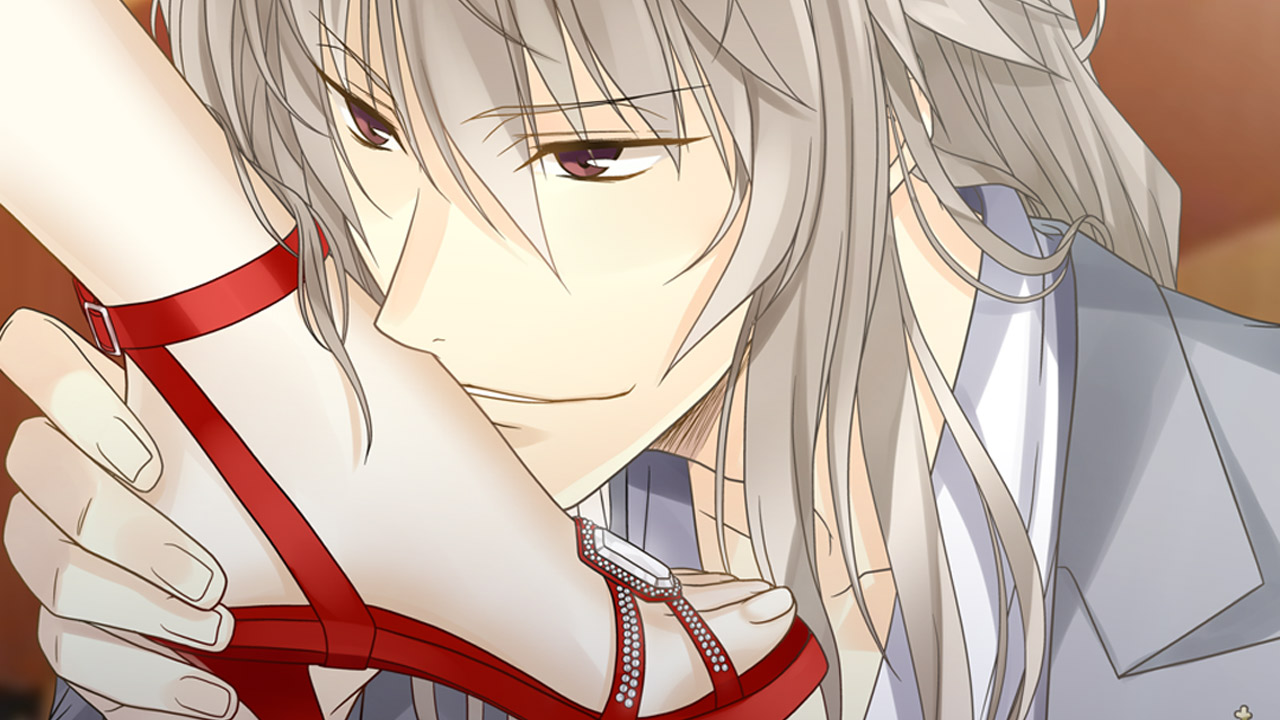 This game had some very beautiful CGs and I actually like a lot of the games created by D3Publishers ‘Forbidden Romance’ series, one of them being Pub Encounters and The Men of Yoshiwara. This game was a shoo-in for me when it first came out on mobile and I bought it immediately when I saw that D3 had published it. However, there was so much that occurred in all of the routes that I was sitting there for a moment unsure of what I read LMAO.

I really couldn’t wrap my head around the strange antics the MC would pull and I didn’t understand the logic of the men either. I try to be understanding, and I like getting to know what makes someone tick in a game and also in real life, but this was just a little much for my tastes. As docile as the game looks, don’t let it fool you with how weird the characters are, and that includes the storyline itself. 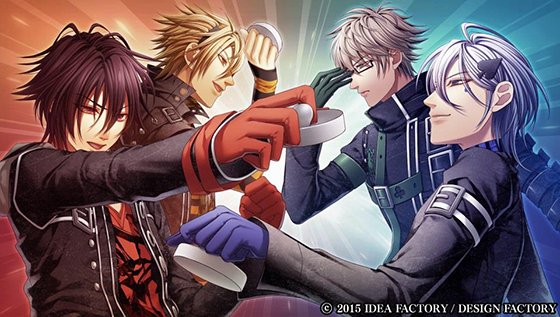 While these games are in my top three of the least favorites, I don’t hate them. It’s rare for me to extremely dislike a game to the point that I rage about how poorly it was created. To put this in a better perspective, games such as these are good examples as to why I break down my reviews to single routes versus reviewing the game as a whole. As there are always certain gray areas of a game that can either be distasteful or fantasy acceptable.

I don’t favor these games but I have no doubt you’ll be seeing reviews about them in this blog in the upcoming months that we see, but until then, these games will be listed on my ‘TBP” list.

What games are your least favorite? Let me know in the comments!