From the moment you wake up, great things have been happening to you. You win the lottery, you get raised at your job, and you also get to have dinner with one of the reputable bachelors of your company. All seems well in order except for one thing… Your apartment blows up without warning before you even reach the building. In a daze, you are thankful that someone from the heavens was watching out for you until five men who have appeared throughout the day reveal that they are devils!

In a strange turn of events you find that your luck was actually scheduled by these demons and you were supposed to be ‘toast.’ To your dismay, they tell you you have to die, but being an awesome person you fight for the right to have ten more days to live because of various reasons.

It is from here you choose whether you side with living with demons or angels… Who will take your destiny?

From the Left and going towards the right:

From top left and top right: 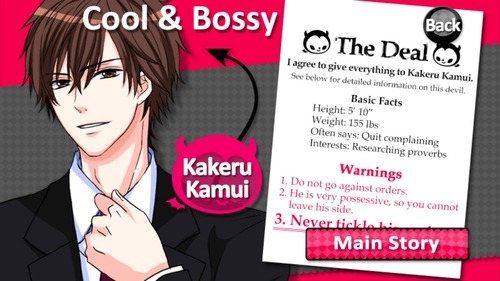 After a day full of miracles and astounding surprises you are about to go home but something stops you from immediately getting to your apartment. It’s within those moments that an explosion happens in front of you and shakes you to the core, realizing you just escaped death you sigh a breath of relief until certain men from throughout the day appear before you.

Claiming to be demons and that you were scheduled to be ‘toast’ you strike a deal with the leader, Kakeru Kamui, to extend your life by 10 days because your older sister will be giving birth and you want to see your niece before you die. After some pretty good back and forth bantering, Kakeru agrees under the condition that one of the demons will be your watch dog.

In this case, because we are talking about our arrogant demon dom-daddy here, we choose him.

Due to your apartment exploding and having no place to live for the next ten days, you are brought into the demon house to live with your male harem. It’s here that Kakeru practically shoves you off to Meguru to show you around since he doesn’t have time to waste on you. During this time you get to see the various rooms and facilitations of the home and get a basic idea of everyone’s personality.

However, when you reach Meguru’s room, your pleasantly surprised by how his room was created in a Japanese style including tatami mats. Meguru gets pretty excited about this and explains how his brother, Kakeru, had designed this room for him. Whilst having this chat with Meguru, Kakeru intervenes and states vehemently that there is no need for Meguru to explain anything to you because you’ll be dead in 10 days time.

Practically kidnapping you away from Meguru, the demon leader takes you to a room and tells you a set of rules to abide by. Since your fate is a done deal, you have no choice but to listen to some of the ridiculous rules placed by Kakeru. However, his main and ultimate law for you is that he requires your absolute obedience to all his orders regardless of how stupid they are.

In the first phase of your ten days you immediately run into some problems with an angel who happens to have a really good nose on sniffing out ‘toastees.’ Kakeru who is your guardian, drains your life-force to diminish your scent but in doing so he takes a bit much out of you which causes you to faint. He’s able to bring you back to life in the office clinic, but it’s here that you learn something interesting about the demon prince.

That although many of his subjects practically rave that he has no faults and such, you find it amusing that one of his weak points is being tickled. Albeit this was hilarious because I tickled the hell outta him when the options popped out like daisies. Everyone who’s read my Dom-Type blog, already knows I have a dislike for this type of character at times. So if there is an option to fight back, you best believe I’m gonna do it.

As your story progresses, and mind you, you only have 10 days to live so this romance is going to be fast and it stretches the limitations of realism. Kakeru starts to ask you to go out with him to various things, whether it’s midnight strolls or going out bowling. While at first, you’re unsure as to why he’s treating you so kindly, you take it with a grain of salt and go along with his whims … because you know… He demands absolute obedience.

But, just because he demands you to be obedient, he never told us that we couldn’t make fun of him for the stuff he wears or the things he’s weak to. Like his choice of fashion, Kakeru actually loves the human language, he’s pretty into linguistics and quotes a couple of famous philosophers to intellects in his route. However, the shirts he picks are just… they remind me of Saeki Takamasa and his outlandish wardrobe style LMAO.

Though we poke and prod this demon in the beginning and make fun of him, you start to unravel his behavior bit by bit. Learning that this man has lived a life of privilege and has always been told that he is special and must act accordingly. His arrogance spawns from the treatment he received as a child which in turn created the persona we see him portray. In the depths of the conversations you have with him, he admits that he is jealous of Meguru for living a carefree life compared to himself.

Whenever Kakeru was ordered to do something, he did it, and he made sure to do it well for the sake of his kingdom and his father. So when he decided to allow you to live, he went against all the codes and laws he was upheld upon and that he risked a lot to extend your life. As domineering as he may seem, he’s a loving character who can’t express himself all to well because he was groomed to never show his true thoughts or emotions.

Hiding himself under a princely arrogant mask in front of others, Kakeru truly desires a life of his own command and joy, so when he meets you he starts to realize that rules and regulations sometimes must be broken.

Falling in Love with Kakeru

Falling in love with Kakeru isn’t easy at first guys, I’ll be honest, his pompous attidue and king sized ego can get under your skin. But, when you actually choose answers that rattle his dignity and challenge his authority, you begin to break down this demon’s walls and see what he truly is like without his crown. While he never shows his affections up front towards you in the beginning, he displays it nonchalantly or through his dominant male taglines.

Kakeru’s story is refreshing as he takes the whole alpha male level to a good place of romance in just as little as ten days with him. He balances his dom habits with his caring demeanor fairly well, and he can take your teasing every now and then with stride without too much issue like the newer dom-types have. However, if you do push him a little too far for his comfort, or he just feels that you need to be corrected by his big ego….

Falling in love with Kakeru is full of emotional turmoil within the first couple of days, there’s a love rectangle, okay? I’m serious, a LOVE RECTANGLE, and there’s a lot of emotional issues that come with it because all the men in this love circus are really good guys. So breaking their hearts to be with Kakeru gets tough, but also, the demon prince falling for you sincerely is a sexy and funny experience for all of Otomelandia denizens.

In his route he risks his life for you and also your family, which causes the catapult of problems in his story as he realizes he’s becoming attached to you in a way that is dangerous. He at first will try to run away due to his duties of being a leader and also the next in line of the throne, but love has different plans for both of you, and when he falls…

He falls hard and takes you with him for the ride of your life.

I really loved Kakeru’s story, as it’s one of the few Dom-Type males characters that are loveable and well written. His story has a lot of intense emotions over the course of the 10 days you’re with him, and you become emotionally involved as a reader. These type of games with well created characters are what I live for, and I can only hope you take a chance on loving him too.