On today’s blog, we are going to talk about captains, and most of them are coming from my otome games. Arrr~ Also, don’t be surprised with the vast majority of them actually being pirates, as for this round, the Hakuouki captains didn’t make the cut in this segment (). Now without further ado, let’s break open the kegs, pour some rum, and light an island on fire…

“O Captain! my Captain! rise up and hear the bells;
Rise up–for you the flag is flung–for you the bugle trills; 10
For you bouquets and ribbon’d wreaths–for you the shores a-crowding;
For you they call, the swaying mass, their eager faces turning;
Here Captain! dear father!
This arm beneath your head;
It is some dream that on the deck,
You’ve fallen cold and dead.”-Walt Whitman

Who was the captain of your otome beginnings?

The first captain of my otome beginnings was Alan/Roy from Pirates in Love, and oh my good lordy he is a mess of a captain. I swear he could be Jack Sparrow’s brother or cousin because he did a lot of weird shit that was hard to forget. Like stealing food from another ship, ruining plans that could save everyone, even if it was an accident.

Although he does have an amazing first mate named Fuzzy, who is in love with Hayate from the Sirius crew, I wouldn’t be caught in a tussle with that woman even though I know how to defend myself. Fuzzy doesn’t mess around, and she can bench press every one. I’m not kidding.

Anyways, Alan who is now called Roy in the Love 365 App from Voltage Inc, is one hell of a kooky character, but he has his moments of cuteness. I’m not someone who likes the flirty type, and I didn’t fall for Alan even in his own route (OUCH!), but he’s a memorable captain that I don’t think many of us can forget.

When you think about captains who is the first one to come to mind? 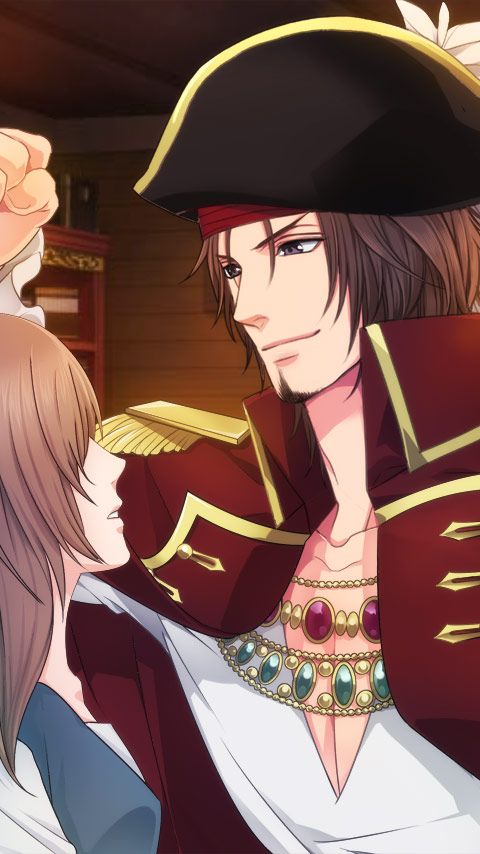 Captain Morgan of the Sirius Crew

Hands down, the first person that comes to mind when I think of captains is Captain Morgan/Ryuga of the Sirius Pirates. One of the other first captains I met in the otome world (besides Alan), he has an affinity for liquor and likes to fool around when things get serious. However, when he does poke fun it means he has a plan, even if you may not understand it right then and there. He’s trustworthy, and a lot of the Sirius crew looks up to him for leadership and guidance when times get tough.

However, he’s a flirt, and he’s big on drinking… So it took a bit of time to get used to his antics with the MC, albeit, the MC possibly made it a bit hard to trek through the game as well, considering she never seemed to evolve with the crew (). However, because I’m a nutcase for historical aspects and such, Capt. Morgan is on my top list of lovely captains to romance in Otomelandia… If you’re okay with the flirty type.

He looks quite dashing in the ‘two years later’ stories.

Who is your favourite fictional captain?

I have never forgotten this man, Captain Leonardo, and it’s because of his complete adoration to his beloved cat that he is one of my favorite fictional captains of all time. I’m sorry, other people may have a different opinion, but when this tough, Naval Captain first came onto the scene, and then practically became this complete weirdo for his cat. I was intrigued at how hilarious his staunch and stern character had morphed into this fanboy for felines, and thus, he became a beloved favorite to my list.

I can’t help but like a guy who loves and dotes on his animals, it also helps me understand how their affection and love can be towards the MC. …

I digress, Leonardo is pretty stiff around you in the beginning because of his line of work, and the fact you’ve been hanging out with pirates; but when he warms up to you he’s incredibly sweet. His whole love and utter devotion for his cat just happens to be one of the triggers as to why I find him adorable and unique. A memorable captain, indeed!

Who is your favourite crew? 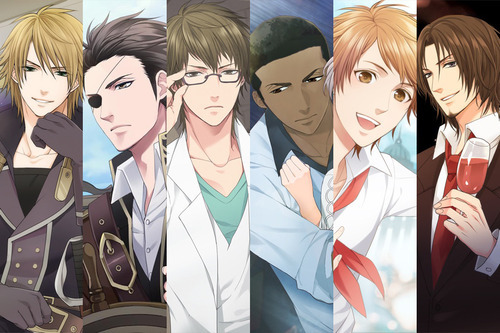 THE USA DEBUT OF THE SIRIUS CREW

My favorite crew is the Sirius Gang, what up home dawgs, whoop whoop~! Okay, enough of that, anyways, hands down, this bunch of pirates has been my all-time favorite since I first stepped into unknown Otomelandia territory. The diverse crew made the adventures we took on the high seas incredible as well as entertaining with comedic moments and such. While I do not have an ultimate favorite husbando from the crew, I can safely say that these guys would be my bros if we had to go on adventures and treasure hunting.

The food grudge is also real here so I suggest you make sure you eat all the food Nathan aka Nagi makes, and also you may want to hide up in the crow’s nest with Hayate every once in a while to escape Eduardo the extreme sadist. Thomas aka Toma is the bubbly younger brother you really want to have at your side when times get tough and you need someone to help cheer you up. Christopher aka Soushi, is the doctor who knows how to tend to your wounds and also ease your heart.

Then Captain Morgan/Ryuga, well if you like to drink to the bottom of the barrel, he’s your man LOL. No, but to be serious everyone in the crew has their quirks and good qualities, but just an FYI, avoid Shin/Eduardo if you don’t like TRUE sadists. If you like Tsun-Tsuns, swing into action with Hayate.

What is your favourite ship?

WHO DOESN’T WANNA RIDE ON THE FLYING DUTCHMAN’S SHIP?!

When Shall We Date was still awesome back in the earlier years, they came out with this beautiful standalone app called Pirates: Teasured Love in the Ocean. With over 11 different men to choose from, you could romance the royal army captain, a naval captain, and your usual boisterous pirate captains. I loved this app so hard until its recent demise into being placed into the HEINOUS Story Jar App… However, I will not go into a complete tangent about that thing here. If you want to know more about my disdain for it check out this post I’ve written here.

Heine is the mysterious captain of the Ghost Ship (aka I want to call it the Flying Dutchman’s Ship), this man is a yandere-ish person but please don’t get scared off by that. He has an amazing ship… and personality XD. No I’m serious, he has a carnival on his ship okay, and I’m down for that and plus his ship carries some awesome sci-fi technology. I’m a nerd for all this stuff, so yea, his ship, hands down-Creepy, Sci-Fi, and Yandere man. Let’s Go~!

The last fandom you experienced has suddenly been cast at sea/into outer space. Who is the captain and who is their crewmates?

I was laughing with this question, I was just playing a game with a captain and crew LOL

This is very funny considering my last fandom is still in Otomelandia, and it’s the cast of Castaway! Love’s Adventure. So instead of making up a crew and captain, this gang already has all that’s necessary including Captain Hughes aka Clyde. The crew has just been shipwrecked onto a foreign island off the coast of nowhere, and there’s ancient ruins. While everyone has a different agenda on what they want to do or wish to do on the island, Capt. Clyde tries his best to keep it together with his cool and level-headed mindset. He can be a dork when it comes to jokes and dry humor, but he’s the man you can rely on in a pinch. Not to mention is pretty much a handy-man for things that don’t involve electronics, and he served in the military.

This gorgeous man is one hell of a captain, and then some.

I’ve made it to the last prompt of Seriously Geeky Sunday’s June Edition from @justgeekingby, and it has beenhella fun and exciting. I got to reach back into certain areas of my travels through Otomelandia and talk about them and hopefully inspire others to search for these games. Tell us who would be your captain in the comments below, don’t forget to tag @justgeekingby so she can see as well! As always, thank you for visiting and see you on the gaming side!

Also, I think I’ve overstayed my welcome on the island, since we incidentally burned the rum… RUN!